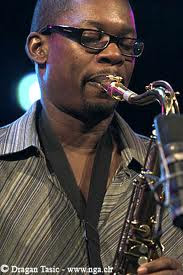 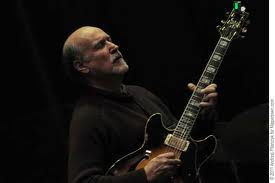 There was a time in the 1950s through early 1970s when Chicago’s South Side was rife with lounges and nightclubs where ensemble jazz was king. Artists, such as Ahmad Jamal, Gene Ammons, Sonny Stitt, Charles Earland and Johnny Hartman were fixtures at places like McKee’s Show lounge, the Brown Derby (now undergoing a revival at the King Tut Room on the South Side with weekend-only performances by local artists such as Maggie Brown, daughter of Oscar Brown, Jr.) and the Apartment Lounge, the last remaining, with Tuesday night shows by renowned octogenarian jazz saxophonist Von Freeman.

Tenor Saxophonist Ravi Coltrane and Guitarist John Scofield might have been channeling those hallowed days in their recent appearance at Chicago’s Symphony Center Presents SCP Jazz Series an intimate pair of sets more apt to be heard in the confine of a small nightclub rather than the cavernous expanse of a symphony hall. Coltrane, the son of jazz saxophone deity John Coltrane, eschewed his normal quartet configuration to appear with a trio, accompanied by Bassist Robert Hurst and Drummer Karriem Riggins.

Known for his fiery forays into musical frontiers bordering on Free Jazz, Coltrane offered a probing set that was most movingly capped by a poetic reading of the evergreen Vernon Duke song Autumn in New York and an emotional tribute to the late poet Zoe Anglesey entitled For Zoe. (Anglesey (1941-2003) was a poet, writer and jazz critic who championed Coltrane’s nascent career. The two remained close friends until her death from lounge cancer.)

John Scofield must have gotten the memo and delivered a set of chamber music jazz that similarly evoked the atmosphere of an intimate cabaret setting.

Unlike Coltrane, who learned of his father’s preeminence through his musician-mother Alice Coltrane, Scofield performed regularly with all of the jazz legends of that vaunted era. As soloist, front man, composer and arranger, he was immortalized on recordings with such jazz gurus s Gerry Mulligan, Chet Baker and Charles Mingus. His 1980s recordings and world tour with Miles Davis are legend.

Scofield brought an untamed Rock sensibility to the jazz scene at a time when the music was threatened with extinction and sparked a renewed interest and revival among a younger, more eclectic audience.

It was the voice of legends that he was echoing from the Armour Stage in a set that reflected the musical attitude of his acoustic album Quiet (Verve, 1996) rather than his out-and-out Funk album A Go Go (1997) or Bump (2000). The most sublime moment of his entire effort was the Victor Young/Ned Washington song My Foolish Heart from the 1949 film of the same name. Scofield, best known for creating a searing, almost supernatural tone from his guitar, caressed the melody line and coaxed his strings to play lyrical lines that eerily recalled the vocal version by Billy Eckstine that became a million seller. Pianist Michael Eckroth lovingly recalled the genius of the late Bill Evans; another artist closely associated with the song, in his long, pensive ruminations on this emotionally charged classic.

Scofield further paid tribute to South Side Chicago Jazz with the Lionel Hampton tune My Little Red Top, which was popularized by saxophone powerhouse Gene Ammons in a 1947 recording. “Do you know this was recorded by Gene Ammons just a few blocks from here on the South Side?” Scofield told the crowd from the stage. (The Mercury recording lists Ammons as the composer.) After the brief history lesson, Scofield launched into a spirited rendition of “Green Tea” from the A Go Go album, recalling the hard-rocking John Scofield of old.

Roy Haynes and Fountain of Youth Band with Special Guest Roy Hargrove on trumpet, grace the Armour Stage Friday, December 9 at 8pm in the next installment of Symphony Center Presents SCP Jazz. For tickets and information, visit cso.org/jazz.

Posted by Dwight the Connoisseur at 5:46 AM