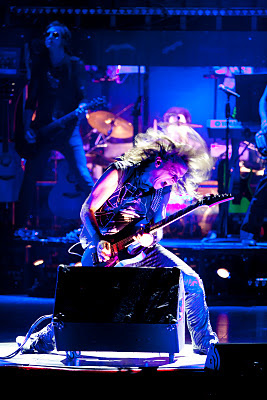 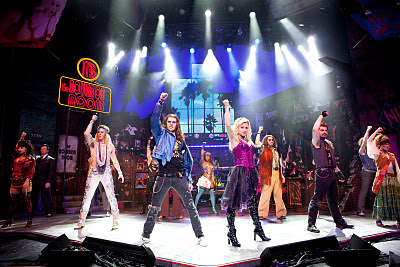 BROADWAY IN CHICAGO: ROCK OF AGES-BABY BOOMERS NIGHT OUT

This weekend would be a great time to break out those old faded jeans that may be two sizes too small, and head on down to the Oriental Theatre for some steamy Rock ‘n Roll. The five-time Tony Award nominated musical slithers its way onto the stage for one weekend only, through Sunday, November 13, with the iconic songs of Whitesnake, Journey, Styx, Reo, Speedwagon, Foreigner and Pat Benatar. You’ll be happy you did it. The high-energy show is just the sort of last-minute rush you’ll need before the Holiday treacle starts to settle in!

The plot is as thin as a wisp of Pat Benatar’s hair, but this is not Masterpiece Theatre. It’s all about the music, and there’s plenty of it provided by the high-energy Rock of Ages Band, conducted by Darren Ledbetter. The dancer numbers, especially the imaginative ‘lap dance’ scene in the second act, really set the decibel reading beyond the red line.

Rock of Ages tells the story of two star-struck kids from nowheresville, Drew (Dominique Scott) and Sherri Shannon Mullen), who decide to head to the bright lights of Tinsel Town and make it big on the Rock stage. The land on the Sunset Strip in 1987, in what was then L.A.’s most legendary rock club. They believe their dreams will finally realized until they suddenly learn that the club is about to be razed by the wrecker’s ball, because of the machinations of an evil German developer, Hertz (an uproarious Philip Peterson, with the world’s worst fake German accent, played for laughs) and his quasi-Gay son Franz (Stephen Michael Kane), who delivers the shows funniest line (I’m not Gay, I’m German!).

The plan to turn Sunset Strip into a replica of Times Square brings about the musical’s most rousing ensemble number, Starship’s We Built This City.” Justin Colombo as Lonny the narrator consistently keeps things moving along with his bright humor and deft sense of comedic timing. Amma Osei as Mother is the real show-stealer, however, with her rock the house, Gospel tinged voice. We could have heard a lot more from her. Matt Nolan is a blaze of sequins, skin and sexy-sweat bravado as Stacee Jaxx. There’s one hilarious ‘love’ scene that has he and Sherrie having a hookup in a bathroom stall that is one of the most imaginative bits of choreography ever. There's tons of raunchy humor and tongue in cheek (pardon the pun) sexual innuendo and a few off-color remarks about gays (it’s the ‘80s, remember!), but all of it is in good fun. It all climaxes with the full ensemble and the audience rockin’ out to Journey’s Don’t Stop Believin’. On that note, how can you possibly go wrong?

Did I mention that you can now get drinks served at your seat with a pre-paid ticket at the Oriental Theatre? It doesn’t get much better than that!

Posted by Dwight the Connoisseur at 3:50 AM