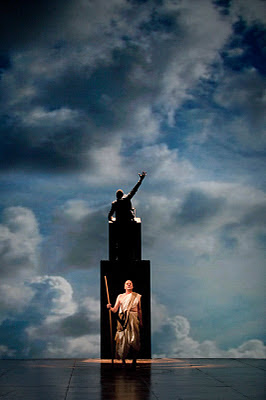 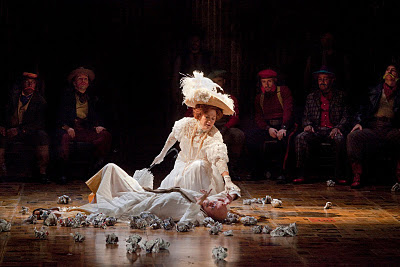 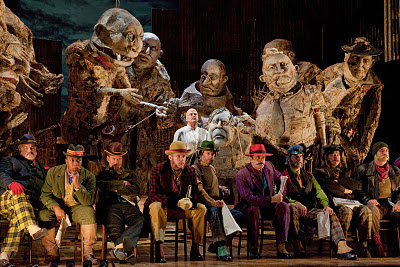 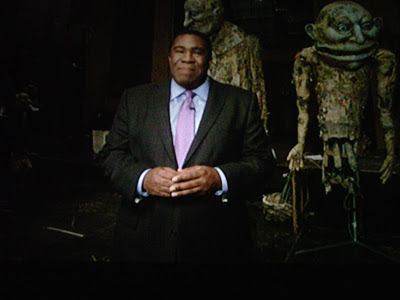 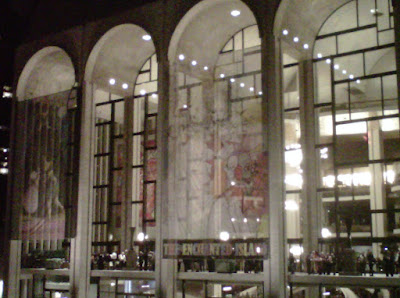 New York-Giant puppets that dwarf singers onstage. A mesmerizing score by a groundbreaking composer. Lyrics in an often-untranslatable “dead language,” with limited subtitles. Dazzling visuals that include flying Hindu gods and shadowy representations of historic icons such as Leo Tolstoy all played against the sweeping panorama of the fight against racial injustice in South Africa. That, in a paragraph is the synopsis of Satyagraha, Philip Glass’s epic recitative of Mohandas KJ. Gandhi’s, the Father of the Indian nation, and his fight against South Africa’s policies of racialism.

“This answers the question of ‘why do we do new productions?’” creator Philip Glass told backstage interviewer, rising Met star, bass/baritone Eric Owens, during the intermission of the Met’s recent Live in HD transmission in movie theatres around the globe. Owens will portray Alberich in Wagner’s Gotterdammerung in the Met Live HD transmission Saturday, February 11 at 12 noon Eastern Time. The performance runs 6 hours, 24 minutes. Many theatres are offering lunch/theatre ticket packages, so please check your local theatre listings or online for details.

An Encore Performance of Satyagraha will be shown in select theatres on Wednesday, December 7, 2011 at 6:30pm in all time zones. Please note that not all theatres that show Met Live HD transmissions will present an encore showing. Check local theatre listings or visit fathomevents.com or metopera.org.

“The answer is that new productions give an existing opera new life,” Glass said emphatically.
"The last time we did a "new" production was in 1991, before the official end of apartheid. Now it's almost 2012, and a far different time altogether. We had to do something that not only looked at Gandhi's life through the long lens of history, but also in a way that would make it relevant to audiences today who may not have an immediate memory or familiarity with any of the events that transpired before."

Visually, Satyagraha is opulent. Sanskrit supertitles are projected onto the rear of the stage as the orchestra plays Glass’s hypnotic score, expertly conducted by Dante Anzolini. Supertitles and back-of-the-seat subtitles translations are discarded for Satyagraha. Instead, the text by Constance DeJong, as adapted from the Bhagavad-Gita -Gita, is sung entirely in Sanskrit, an ancient language that precedes Biblical times. Subtitles are projected only occasionally on the wood and corrugated iron sets, more as thematic punctuations rather than actual translations. Staging, as directed by Phelim McDermott with stunning sets and puppet designs by Julian Crouch underscore the opera’s setting as more an extension of Gandhi’s mind during prolonged meditation, rather than a recounting of historical fact.
Dazzling visual components, augmented by giant puppets, wall-sized video projections and streams of properties representing reams of newsprint and the undulating waves of water were all created by the Skills Ensemble team members Phil Eddolls, Carlie Folorunsho, Alex Harvey, Nick Haverson, Tina Koch, Charlie Llewllyn-Smith, Vic Llewellyn, Charlotte Mooney, Kumar Muniandy, Caroline Partridge, Rajha Shakiry and Rob Thirtle. Team mebers Rob Thrtle and Philip Eddolls discussed their efforts with backstage host Owens. "What we created, visually, were the touchstones of Ghandi's life, which are not necessarily referred to in the text of the opera, but are integral to the story of his life," Eddolls said. "We see representations of the major influences of Gandhi’s life, including his past present and future in terms of the god’s, as represented in the Bhagavad-Gita, Leo Tolstoy, the philosophical leader of the Bolshevik Revolution in Russia, and Dr. Martin Luther King, Jr., who channeled Gandhi’s theory of non-violent resistance into the marches of Civil Rights Movement."
These and other points were well brought out by Mr. Owens in his backstage interviews and commentary. Owens distinguished himself as a host and interviewer by his ability to think nimbly on his feet, not having to scramble through note cards or look over his subject’s shoulder for a teleprompter. He was able to ask insightful questions because of his innate knowledge of opera and he was also able to elicit illuminating responses from the singers due to his empathy toward his fellow Met opera artists.

All of the singers performed spectacularly, particularly tenor Richard Croft as Gandhi, who performed Glass’s demanding score with elegance and precision throughout. His feat was further magnified by the fact that he is virtually onstage throughout the opera. Maestro McDermott similarly distinguished himself along with the Met Opera Orchestra with their ability to navigate the shifting tempi and kaleidoscopic tonality and moods of Glass’s mesmerizing score.

An illuminating historical perspective on Gandhi’s life and work and the historical facts behind his struggle for racial equality and equitable treatment of Indian mine workers in South Africa, further sets the factual background of Glass’s epic work. The producers of the segment were Elena Park, Kathy Doughty and Doug Graves, who addressed the audience in a videotaped interview. These and other video segments and interviews are the exclusive purvey or Met Live in HD audiences and further amplify the value of the price of admission.
Posted by Dwight the Connoisseur at 9:42 AM