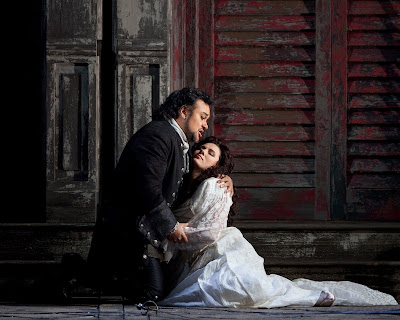 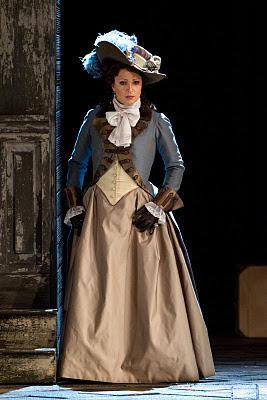 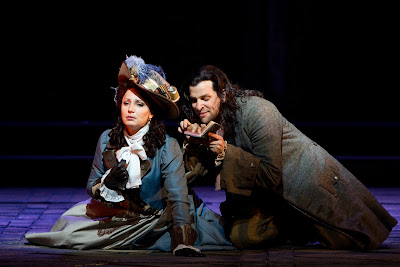 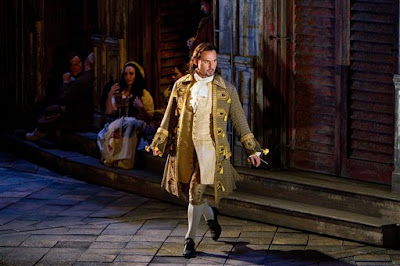 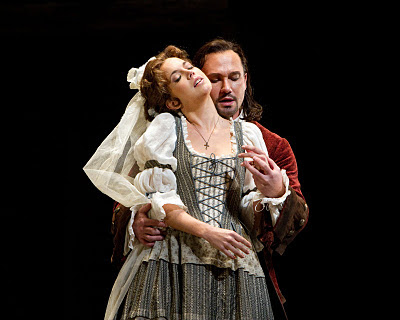 Met: Live in HD grosses over $2 MIL in North America for Don Giovanni

3. Barbara Frittoli as Donna Elvira and Luca Pisaroni as Leporello

5. Mojca Erdmann as Zerlina and Mariusz Kwiecien as Don Giovanni

MET: Live in HD’s live transmission of its new production of Mozart’s Don Giovanni brought a watershed occurrence. An estimated 107,000 saw the performance on 850 screens in North America, grossing $2.3 million in ticket sales. An estimated additional 109,000 people saw it live on 625 screens in 42 foreign countries, including 28 in Europe, nine in Latin America, and on screens in Russia, Egypt, Israel, Morocco and the Bahamas.

Directed for live transmission by veteran Live in HD Director Barbara Willis Sweete, the new production by Tony Award winner Michael Grandage was conducted by the Met’s new Principal Conductor Fabio Luisi in his Live in HD debut. In addition to this being his Met Live in HD debut, Maestro Luisi further dazzled audiences by conducting part of Mozart’s demanding score from the harpsichord, which he played while simultaneously conducting.

“It’s all one continuous motion,” Luisi said of his unique capability to backstage interviewer, MET diva Renee Fleming. “I’m able to do this because I’m working with one of the most flexible orchestras in the world. They’re able to switch gears at the drop of a hat and speed up or slow down to accommodate the singers. That’s the great thing about this orchestra. They are really able to listen to singers and support them by changing the tempo quickly when they need to.”

Tenor Ramon Vargas was the standout performer of the show with his beautiful arias and heart-rending delivery. Mozart’s Don Giovanni is a showcase for beautiful singing and the sterling cast excelled on all counts. Marina Rebeka was electrifying as Donna Anna, one of Don Giovanni’s (a stentorian Mariusz Kwiecien) early conquests. Mojca Erdmann provided a sympathetic portrayal of Zerlina with her silvery, shimmering voice. Luca Pisaroni showed both strong acting and vocal skills in the role of Leporello. Stefan Kocan lent gravitas and a rumbling deep bass register to the role of the Commendatore, creating a spine-chilling spectacle in the final act.

The marvel of afternoon was star Mariusz Kwiecien who, in a bizarre offstage drama of his own, suffered injury to his back in the final dress rehearsal and had to undergo back surgery and extensive physical therapy in order to return to the stage in time for the afternoon’s plawless performance.

The towering rustic sets and the beautifully detailed costumes by Christopher Oram added to the authentic mid-18th century feel of this fast paced production. The multi-storied design of the sets particularly came into play in the final act in startling fashion.

Don Giovanni takes place in Spain in Spain in the mid-18th century. It centers on the vengeful and lustful nobleman Don Giovanni and his destructive sexual exploits. He murders the father of one of his young exploits in a duel in the first act, setting in motion the cycle of vengeance that drives the plot, leading to his ultimate demise.

“You have to understand that the entire story happens in a single day,” Ramon Vargas (Don Ottavio) tells Renee Fleming in a backstage interview. ”So, in the Second Act when Ottavio asks Donna Anna to marry him, she tells him that now is not the time. Of course, her father has just been killed on the previous morning. It’s too soon!

“In many ways, she’s torn. She knows that Ottavio is the right man for her, but she is still attracted to the seductive power of Don Giovanni.”

The masked ball at Don Giovanni’s home at the conclusion of Act One is one of the liveliest in all opera. The ornate costumes and terrific dancing by the cast and corps du ballet by Choreographer Ben Wright is captivating. This is an opera worth seeing again at the Encore Presentation November 16. Visit metopera.org/HD or fathomevents.com for tickets.

Posted by Dwight the Connoisseur at 9:52 AM