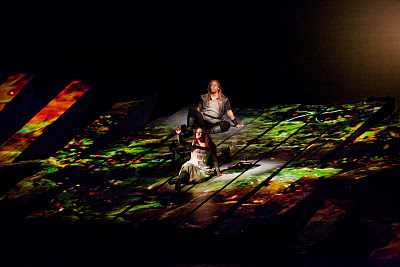 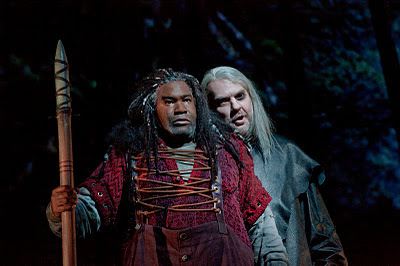 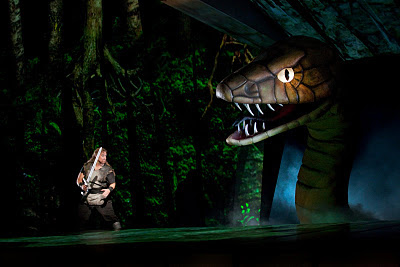 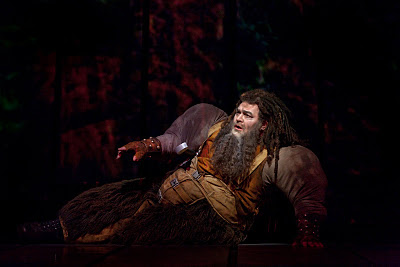 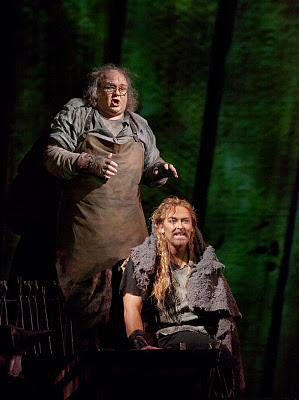 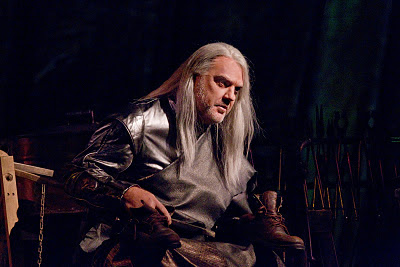 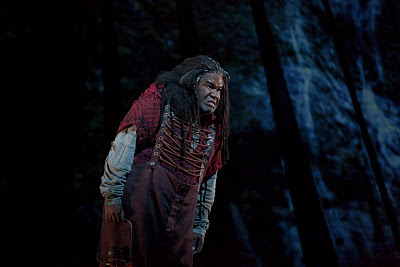 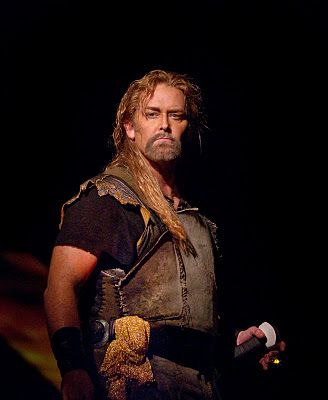 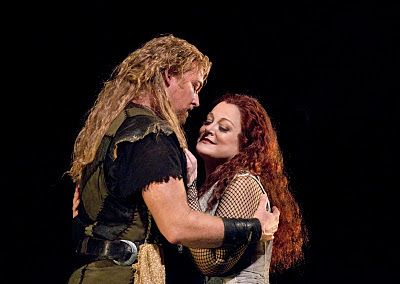 Eric Owens as Alberich (l) and Bryn Terfel as The Wanderer

Fafner the Dragon squares off against Siegfried

Bryn Terfel as The Wanderer (Woton)

More than 100,000 people on movie screens in 50 countries watched a landmark live transmission of the Metropolitan Opera's new production of Richard Wagner's Siegfried, the third installment of his Ring cycle, directed by Robert Lepage and eloquently conducted by Fabio Luisi, the Metropolitan Opera’s new Principal Conductor. They also saw the Met debut of a new Siegfried and a promising Wagnerian sensation in-the-making. Jay Hunter Morris is a true Helden tenor (heroic tenor) in the tradition of such Met legends as Placido Domingo, Siegfried Jerusalem and the late Lauritz Melchior. Morris hails all the way from Paris(Texas that is) and just a few months ago, as told to Met backstage interviewer and soprano superstar Renee Fleming, was selling roller blades in Central Park, a few blocks from the Metropolitan Opera stage, where he gave his towering, and possibly career defining performance.

The third time was the charm for the Met in its casting of the role of Siegfried. Another of opera’s popular Wagnerian tenors was originally assigned to sing the role, but Ben Heppner withdrew in February. Gary Lehmann was then brought in, but also left just over a month ago. That’s when Morris was asked to step into what is said to be the toughest tenor role in the world. His prior experience in the role this past summer with the San Francisco Opera served him well, because within days of his arrival, he was in full costume, singing in his first Met Dress Rehearsal, an experience beautifully documented in a video segment presented during the first intermission of the Met’s Live in HD transmission.

Morris describes his unconventional journey from Paris, Texas to the stage of the Metropolitan Opera House. “In Dallas Texas a few years ago, I saw Traviata. I was so fascinated, I said ‘I want to try that.’ Since then, I’ve had enormous buckets of good luck! You know, it wasn’t all that long ago that I was selling roller blades at 72nd & Central Park West (just a short distance from Lincoln Center where The Met is housed) and it wasn’t all that long ago that I was passing out towels at the Fitness Center in Paris, Texas. There’s no magic formula. I’m just the luckiest guy in the world.”

That's the beauty of attending a Live IN HD performance, all of the backstage interviews and special segments are exclusive to movie theatre audiences. The brilliant close up camera work, particularly in this broadcast’s camera direction, also provides visual insights that just can’t be seen from a seat in the house, no matter how close you are. (Case in point, the loving glances and visual asides between Siegfried and Brunnhilde conveyed the romantic spark that ignited between them in Act III.) As always, principal Live In HD Director Gary Halvorson (TVs Two and a Half Men) did a stellar job. This Met Live In HD matinee was also distinguished by the fact that this production marked the first time ever that new 3D, and even 4D technologies where utilized in combined fashion on the opera stage.

The new production, by Canadian director Lepage, dwarfs the action on stage with a 45 ton apparatus of movable steel panels, collectively known as Ex Machina, which rotates and pivots on cues from a bank of computers offstage. 3D images are projected on the moving panels throughout the opera to depict scene changes from the forest to Fafner’s underground lair and the subterranean realm of the Nibelung to the fire-ringed mountain where Brunnhilde lies immobile. At one point, as Siegfried traverses the pivoting planks in search of Brunnhilde, he seems perilously in danger of sliding into the abyss. Whether that was intentional or a byproduct of the device’s inherent dangers is anyone’s guess, but Morris nimbly regained his footing and proceeded on his noble quest.

"This is the first time that 3D technology, like you see in the movies, has been used on the opera stage in combination with all these other technologies, like tracking and night vision used in flight simulation and in combat," said Roger Parent, President of Realisations, the company that creates the Ring's interactive video projections, to Fleming in a backstage interview. While he was talking, Met HD cameras captured shots of the stage crew meticulously placing rods and bolts into the mechanized stage that served as the backdrop for the 3 dimensional forest, mountains and streams of Wagner's Siegfried.

Besides Morris's commanding performance, Deborah Voigt was the consummate Brunnhilde, lending dramatic color and vocal stamina to the demanding role. In the early scenes, Morris was especially adept at conveying the awkwardness and unbridled energy of the youthful Siegfried. His voice seemed more than up for the challenge of singing virtually without a break in the five-hour production. His voice only gave way for a brief moment when a note escaped his vocal grasp while reaching for the crescendo at the end of Act One when he forges his sword, Nothung, from its shattered fragments. His performance was otherwise robust and flawless (Morris spoke that a note ‘ got away from me’ in the dress rehearsal segment, but was quickly reassured by his fellow cast members and crew.)

Eric Owens was a commanding presence as Alberich. His perfect German enunciation and rich, mahogany basso profundo gave his character added depth and a sense of underlying menace that made for a mesmerizing performance. Owens will reprise the role in the Met's new production of Gotterdammerung, the final installment in the Ring cycle, which premieres. January 27. It will be transmitted Live In HD February 11, 2012 at Noon Eastern Time, 11am Central.

Owens spoke about the difference in his character in the two operas while backstage with Renee Fleming. "The Tessatura (general vocal range) is higher in Siegfried, so I really have to be 'on' for this one. It requires me to reach, not only for a higher pitch vocally, but dramatically as well."

Bryn Terfel as The Wanderer (Woton in disguise), brings an incredible heft to the role with his richly textured voice and superior acting skills. I bet he strolls around Lincoln Center Plaza wearing that cool forest green hat during his off hours!

One of the more delightful and technically dazzling moments was Siegfried’s encounter with the 3D Forest Bird that led him to a sleeping Brunnhilde in Act III. The “voice” of the bird was provided by soprano Mojca Erdmann, who sang fluidly offstage, and a trio of wind instruments, including Stefan Hoskuldsson, Principal Flute, Elaine Douvas, Principal Oboe and Anthony McGill, Principal Clarinet.

“My singing was actually the ‘cue’ for the bird to fly,” Erdmann revealed in her backstage interview with Ms. Fleming (who is a marvelous interviewer, by the way. Her sensitive and comforting manner towards her colleagues elicits some very revealing and informative answers from them.) Realisation President Parent further explained; “The movement of the bird and the other 3D imagery was actually triggered by the movements of the actors. Its the kind of motion detection technology used in combat,” he said. “The operative word here is ‘tracking.’ In this production,” he elaborated, “we use at least three new technologies commonly used in dramatically different circumstances. We have 3D technology, which we see today in the movies. We have technology that is typically used in flight simulation. Then there is night vision and motion detection used in combat situations. In real life, these technologies are either used to make movies or to fight wars. When we put them all together and give them to theatre or opera people, they use them to make magic!”

Note that the encore presentation of Siegfried will not be part of the Met Live HD series until May when the complete Ring Cycle is broadcast, exact dates still to be determined.

The next Met Live IN HD transmission is Satyagraha (truth force), Philip Glass's musical dramatization of the politically formative years of India’s martyred independence leader, Mahatma Gandhi, and his fight against racism in 1890s South Africa. Historians say that experience formed the ideological bedrock of his philosophy of Civil Disobedience, which became the foundation to all modern protests from the Civil Rights Movement of the 1960s to the present-day Occupy Wall Street demonstrations. Satyagraha airs in movie theatres Saturday, November 19 at 1pm Eastern, Noon Central. For tickets and information, visit www.metopera.org or www.fathomevents.com.

Posted by Dwight the Connoisseur at 8:44 AM