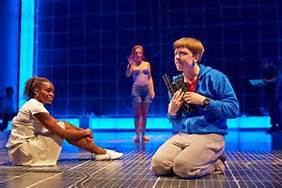 Julliard graduate Adam Langdon's inspired performance of the central character Christopher is just one of the components that makes Broadway In Chicago's current production, The Curious Incident of the Dog in the Night-Time, running now through Christmas Eve, December 24 at the Oriental Theatre in the Loop, the most engrossing offering on any Chicago stage.
If you're a bit weary of all the holiday treacle and looking for something a bit more intellectually and emotionally challenging, this will certainly fill the bill. Be cautioned that this play requires your undivided attention, as the dialogue and monologues are fast-paced and laced with metaphor and hyperbole (there's even a brief discourse on the meaning and significance of metaphor from the on-stage narrator). Even a short lapse in attention span could rob the listener of vital information on the complex plot-points that define an often internal exploration within the psyche of the young male protagonist.

A new play by Simon Stephens, adapted from the best-selling novel of Makrk Haddon, and directed by Tony-award winner Marianne Elliot (War Horse), Curious Incident is the winner of five Tony Awards and is the longest running play on Broadway in the last 10 years and continues to play to sold-out houses in London. 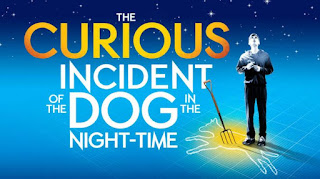 The play tells the journey of 15 year old Christopher, an idiot savant of sorts, with an expanded array of emotional problems and personality quirks. He doesn't like to be touched, he can't bear to talk to strangers, and he exists by means of a daily series of set rituals. For him, nothing is easy. His only saving grace is an occasional epiphany that exhibits a rare flash of genius ("Everyone tells you to be quiet, but they never say for how long!")

The journey begins on a quiet street in the London suburb where Christopher resides. He discovers the corpse of his neighbors dog, who has been brutally killed. Automatically, the neighbor accuses him of the heinous act. Enter Christopher's weary  father, Ed (Gene Gillette-War Horse), who bails him out of police custody, with multiple admonitions for Christopher to behave himself. We later learn that the father may have been complicite in he act. Regadless, Christopher immediately sets out on a quest to find the real killer of the dog, which sets off a whole series of emotional fireworks within, which are brilliantly represented with dazzling special effects in a black box of a set with a geometric grid created by Tony-Award-winner Bunny Christie and imaginative video effects by Tony Award-winning video designer Finn Ross and lighting by Tony Award-winner Paule Constable.

Christopher's father makes a stunning revelation, nonetheless, the boy is set on leaving the safety of his claustrophobic world to roam the streets of London in search of the truth. His encounters with strangers as he develops clues to his mystery and his ability to cope with the obstacles he faces, makes for the elements of the internal drama at the core of this psychological Rubiks cube.

The Curious Incident is an all-engrossing theatrical experience that may take more than one sitting to fully absorb. My only quibble is that the audio on some of the characters, particularly the mother, and even Christopher in certain moves, was a bit muddled in spots. If you miss one verbal nuance, you've lost a lot of the meaning behind Christopher's actions. So bring, your listening ears and be prepared for a real emotional and psychological roller coaster ride that sums up as one of the most satisfying theatrical experiences you will ever have . The Curious Incident of the Dog in the Night-Time is at the Oriental Theatre through December 24. For more information, visit BroadwayinChicago.com.
Posted by Dwight the Connoisseur at 12:55 PM