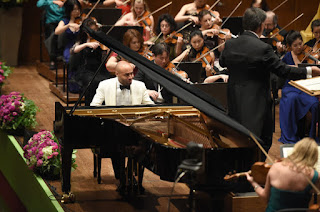 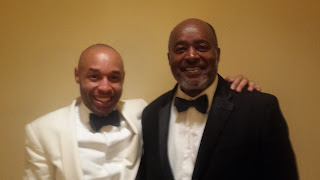 NEW YORK--The 175th Anniversary Season of the New York Philharmonic not only honors the storied legacy and rich history of one of the world's premier orchestras, it also marks the final season of the organization's bold music director Alan Gilbert.

The New York Philharmonic is the oldest orchestra in the United States, and one of the oldest in the world. With that in mind, the orchestra also celebrated its 175th anniversary in a very 21st century manner; its first-ever live broadcast on Facebook. If you missed the live broadcast, the concert is currently available  On-Demand on the Philharmonic's website at nyphil.org and on You Tube.

The concert began with the New York Premiere of John Corigliano's Stomp for Orchestra,  a rollicking tour de force combining country, bluegrass and jazz, that had the orchestra's players retuning their instruments in order to play the composition's pungent dissonance, and stomping their feet in time to the music in true country music fashion; hence the title. It was a brash and energetic way to start a concert filled with vibrancy.

Aaron Diehl's precise attack was evident from his opening phrases. His erudition and careful restraint at the keyboard allowed Gershwin's percussive melodies to unfold and explode in thunderous fashion. Gilbert kept the orchestra in check with exacting rhythms and perfect balance, allowing Diehl's elegant articulation to ring through. His skill as an improvisational artist came to the fore in the closing cadenzas that allowed him to stretch out and display his considerable keyboard chops. His was a bravura performance in every way. Here's hoping this marquee appearance with the New York Philharmonic cements a place for him at the head of the short list of concert pianists adept at presenting contemporary repertoire, a cause which conductor Gilbert has long championed.

Dvorak's monumental masterpiece New World Symphony concluded the program with a comprehensive reading that gave a new voice to this beloved masterpiece. This performance was part of a season-long, citywide New World initiative to give all New Yorkers an opportunity to discover this landmark work in the city in which it was conceived by the composer. The work will be presented in a series of on and off-site performances before diverse audiences and at outreach events, For more information on the New York Philharmonic's 175h Anniversary Season, visit nyphil.org.

Posted by Dwight the Connoisseur at 2:16 AM