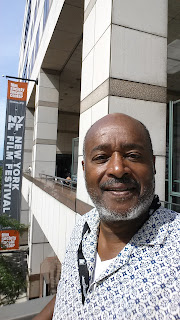 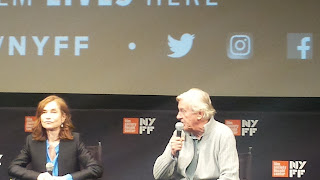 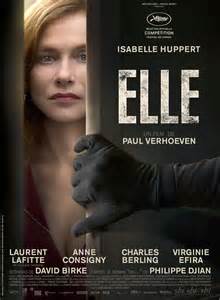 The French film "Elle'" starring the brilliant actress Isabelle Huppert, often deemed the best film acrress in the world, is currently making its way around the country in limited release and is France's entry to the Academy for Best Foreign Language Film Oscar.  After viewing this film at both the New York and Chicago International Film Festival's, the former, with both the actress and director present for a press screening and news conference, and Red Carpet  appearances at the New York Festival's final weekend screenings, there's every reason to believe that this film will get the nod.

Director Paul Verhoeven (Robocop, Basic Instinct) begins his rape revenge fantasy Elle by literally keeping his audience in the dark. We hear the sounds of dishware and furnishings crashing to the floor and the grunts and groans of struggle and rough sex. The action itself is first revealed through the placid gaze of the family housecoat before we see the main character, Michele, played with laser-like brilliance by France's greatest actress Isabelle Huppert, writhing on the floor, attacked by a masked stranger clad in black ninja garb. Her reaction at the conclusion of this brutal act is startling, as she calmly sweeps up the broken dishes, draws her curtains and goes on calmly and purposefully about her life as the CEO of a video gaming company that, coincidentally, specializes in producing especially brutal and graphic games. (One of the subplots involves the production of a particularly violent new game that sends the audience on a wild goose chase as to the identity of her possible assailant, but that is only a temporary diversion). David Birke's script, based on the novel of the same name by Philippe Djian, and photographed with understated elegance by cinematographer Stephane Fontaine, is a carefully paced study in the aftermath of rape.

Its interesting to note that, according to the actress,  the original script for Elle had been written in English. The director, in fact,  had every intention of making this film in English at the outset, but no American actress would attach herself to this edgy project, so it went to the French. Huppert jumped at the role and posited that she had already had it on her radar for some time. Perhaps, the resulting superb film in French is Kismet. 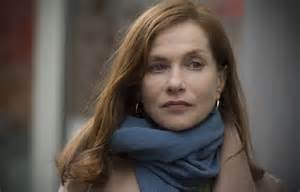 Anne Dudley's sparse score is the underpinning for the taut unfolding of this shaded farce. In a complex change of will, reflected in Michele's steely gaze and a complex turn of events, the victim of this heinous act turns the tables, first, by refusing to play the victim, then later becoming her attacker's collaborator and finally, his nemesis. The film is an intricate Rubric's cube of sub-plots, with Michele having an affair with her best friend and colleagues' husband, who is also her business partner. Oh! Did I mention that Michele is also the daughter of an infamous mass murderer, reviled by all of France? Her father is dying yet she refuses to visit him at his bedside at the prison where he is serving a life sentence. I thought not. Those are just some of the twists and turns in this curious mix of violence, humor and human pathos that makes this one of Huppert and Verhoeven's best films ever.
In French with English subtitles.

Posted by Dwight the Connoisseur at 9:06 AM