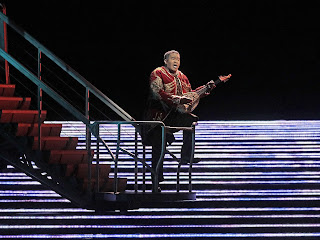 NEW YORK--The Metropolitan Opera's new production of Finnish composer Kaija Saariaho's L'Amour De Loin (Love From Afar)  is significant on many levels. Not only does it star the superlative African American bass-baritone Eric Owens, the opera is only the second written by a woman to be presented by the company, it is also only the fourth time that a woman has conducted from the pit, in this case, Susanna Malkki, who is also from Finland. 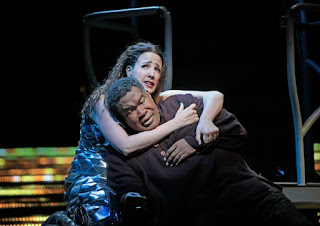 Eric Owens as Jaufre Rudel with Susanna Phillips as Clemence
It seemed that the entire fashion and design world turned out the opening night premiere performance at the Metropolitan Opera House. Isaac Mizrahi, for example, was holding court in the Grand Tier lounge area with a group of fellow designers, some of whom wore outfits that rivaled the costume designs onstage. The curtain calls at the opera's dramatic conclusion saw as many luminaries standing and applauding in the front rows, as there were onstage, taking their well-deserved bows. 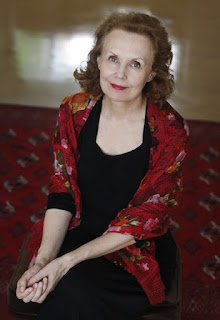 The Opera's composer Kaija Saariaho
Coming on the heels of a bruising Presidential election, the underlying theme of L'Amour De Loin seemed to resonate with unusual clarity. The opera tells the story of  a famous troubadour,  Jaufre' Rudel, Prince of Blaye, weary of a life of pleasure, who embarks on a search for an idealized, distant love. In his heart, he is resigned to the fact that he will never find it, but a Pilgrim (Le Pelerin in French), sung luminously by mezzo-soprano Tamara Mumford, tells him that she knows  of just such a woman,  Clemence, the Countess of Tripoli, sung brilliantly by Ryan Opera Center of Lyric Opera Chicago alum, and rising Met opera star Susanna Phillips. Her appearance in the final scene is one of the most commanding for a female lead since The Ring. 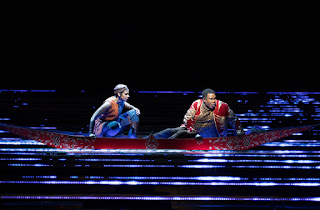 Tamara Mumford as The Pilgrim with Eric Owens
Jaufre's friends mock him for his longing and his seemingly foolhardy quest, but he embarks upon it any way, forging the tumultuous seas, here represented ingeniously by Production Designer Robert Lepage as strands of thousands of LED lights spanning the stage and protruding out over the orchestra pit. Lepage is best remembered for his Ex Machina rotating planks in the Met's Ring series. Some took exception to his gargantuan movable set in that production. Here, rather than drawing attention to itself, the mechanics are the servants of the art. 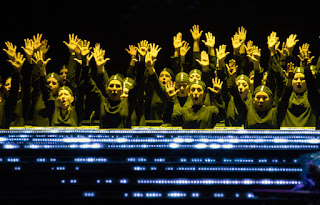 Owens, as Jaufre, arrives dramatically at the outset of the opera on an elevated bridge, standing in what resembles a ships prow. The image is commanding and Owens is in superlative voice. He remains so throughout, delivering a performance of emotional gravity and artistic supremacy. Chorus members and dancers, emulating mermaids, pop-up and undulate throughout the performance creating a visually stimulating scene. The opera is a feast for both the eye and the ear.

Set in 12th century France in Aquitaine, which was then an area of  dispute within the Catholic Church in the  Bordeaux region,  with the  the local  French fighting against  the influence of the English monarchy.

Saariaho's score, with its exotic and unorthodox instrumentation, evokes the tumultuous religious and social upheaval of the period through her adept use of tonal coloration. The libretto by Lebanese-born author Amin Maalouf displays the sheer emotional power of poetry.

In many ways, this production is a first of sorts for the Met. There has never been both a female conductor and composer on the same program, and certainly not with a black male lead on the stage. Social significance notwithstanding, this is an artistically superior production on every level. Those who have already seen it would do well to see it again. It is presented live at the Met through Dec. 29 and in Encore Performance on thousands of movie theatre screens worldwide in Met Live HD, Wednesday, December 21 at 6:30pm local time. Visit metopera.org for tickets and information, as well as  fathomevents.com for Live in HD tickets.

Posted by Dwight the Connoisseur at 10:18 AM