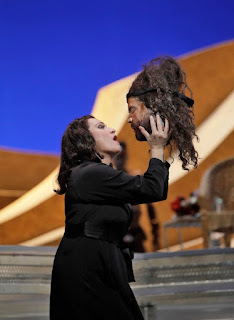 Patricia Racette as Salome with the head of John The Baptist

NEW YORK--This was clearly soprano Patricia Racette's night. She had stepped in to what was, for her, the unlikely role of Salome, replacing an ailing fellow American soprano Catherine Naglestad.
A few opening curtain jitters aside, hers was a superlative performance, with full throttle vocal power and dramatic substance to spare. Even a lengthy athletic dance scene that ends with the star shockingly bearing her all, is executed with stamina. (Could Dancing with the Stars be next!?) Presented as an Opera in one act, without intermission, it was a two hour and forty minute thrill-ride into the black hole of an unredeemable soul. 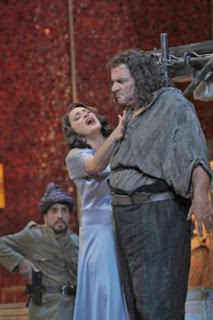 Patricia Racette as Salome with Zeljko Lucic as Jochanaan


This Salome is a revival of Jurgen Flimm's 2004 production, which puts a modern spin on the biblical tale of King Herod Antipas's court in Galilee in the early first century AD. The present production places the story in the unspecified present day, with a glitzy modern set and costumes by Santo Loquasto. On one side is a red walled cocktail lounge with a sweeping staircase, representing
Herod's court and his throne. On the other,  a sleek, sandy dessert with undulating geometric waves.
At the center of it all is a giant cistern, submerged at the front of the stage, that is accessed by an elevator. This is where the booming voice of Jochanaan (John The Baptist), sung with powerful conviction by Serbian baritone Zelijko Lucic is heard in the early going, until he is brought up, reluctantly, in chains, to face his oppressor.  Add all of this drama and vocal prowess onstage with the finesse of young German conductor Johannes Debus in the orchestra pit, and you have one powerhouse of a performance. 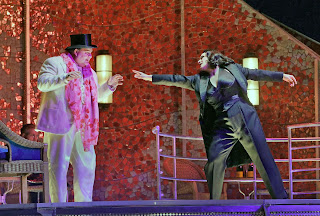 There are superlative vocal performances throughout, each one surpassing the previous as the more than a dozen featured cast members appear; German tenor Gerhard Siegel is both dramatically and vocally, the perfect Herod. He is as angered by Jochanaan's lack of fear and deference as he is fearful of his unbridled faith and zealous Fire and Brimstone pronouncement's against Herod's temporal life of sin and debauchery. Spanish mezzo-soprano Nancy Fabiola Herrera as Herodias, Salome's mother, is particularly outstanding, as is Chinese tenor Kang Wang as the young captain Narraboth.
Reginald Braithwaite is especially menacing as the Executioner. Although his part is wordless, it casts a deadly pal over everything in his appearances throughout the opera. In the final scene,  he stands as a foreboding specter, advancing to deliver the final blow to Salome just as the curtain descends. Overall, this was a heart-stopping performance.


Posted by Dwight the Connoisseur at 10:44 AM