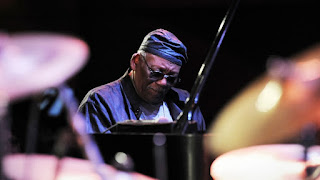 NEW YORK--To hear Randy Weston play his fluid jazz and blues improvisations on the keyboard, you wouldn't know that he had celebrated his 90th birthday this spring. Wearing his trademark Kafia, West African hat, Weston embarked on a free-wheeling set that traced the roots of jazz from the dawn of the drum beat in Africa to the flowering of bee bop and the Afro-Cuban explosion of Dizzy Gillespie's explorations of the early 1940s with the legendary percussionist Chano Pozo,  Weston proved why he was named Medgar Evers College's first-ever Artist-On-Residence for the 2016-17 academic year and why Harvard University acquired his archives of thousands of recordings and written scores last month. His rollicking set at Jazz at Lincoln Center's Dizzy's Club Coca Cola, was no tweedy master class, but a vivid  romp through jazz history that revealed the inner workings of a true genius.

Weston has been quoted as saying that "Africa is not the geographic area that people occupy. It is the spirit of our ancestors."

From the opening number, it was full speed ahead into the very hot, molten core of the world of pan-African jazz with Coltrane-inspired tenor saxophonist Billy Harper,  percussionist Neil Clarke on hand drums, cymbals and chimes, alto saxophonist/ flutist T. K. Blue and bassist Alex Blake, this was an exemplary set.

All of the works presented at Dizzy's Club Coca Cola were Randy Weston's original compositions, and each came with a short, and sometimes humorous backstory. Berkshire Blues recalled a triumphant appearance at Tanglewood. African Sunrise referenced a landmark 1955 release that included excerpts from a lengthy Weston tome "Spirits of Our Ancestors," to Chano Pozo, which showcased the lightning-quick hand drums of Neil Clarke and Hi Fly, in which saxophonist T.K. Blue paid homage to the great Dizzy Gillespie with riffs that included snatches of Diz compositions Manteca, Hot House and Night In Tunisia.

In November, Weston was awarded the Legacy Award at the State of the Black World Conference in Newark, along with Hugh Masakela, among others in an event dedicated to the late African American poet and statesman Amiri Baraka,  a Newark native. The honorary chair of the conference was the esteemed actor and activist Danny Glover. The New Year of 2017 will see the release of Weston's definitive CD, "The African Nubian Suite" which promises to further cement his reputation as a cultural historian. In his set at Dizzy's, Weston proved that one can give an object lesson in music history, while maintaining the highest standards of entertainment.

Posted by Dwight the Connoisseur at 6:26 AM