Royal Concertgebouw proves why it is called "best orchestra in the world" with a brilliantly conceived Mahler Symphony No.5 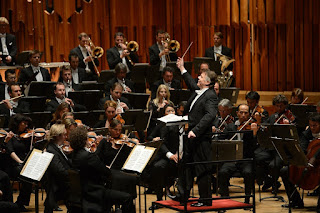 NEW YORK, NY--The Royal Concertgebouw Orchestra of Amsterdam is considered by many to be the best symphonic orchestra in the world. Any doubters were certainly silence by a brilliant and pensive reading of Mahler's Symphony No. 5 under the incisive baton of conductor Semyon Bychkov,who has had a long association with the orchestra, dating to 1984. The sympatico between orchestra and conductor was deeply evident throughout the performance.

The program began with Detlev Glanert's Theatrum bestiarum, Songs and Dances for Large Orchestra, which the composer described as a "visit to a zoo of human beings.

"I look at people as animals because sometimes they behave as animals," the composer said of the impetus for the piece, which is at times a bombastic avalanche of sound and rhythms, bringing all of the collective fortitude of the brass and percussion to the fore in some unusual combinations and configurations. The overall effect is an overwhelming avalanche of discordant sounds and aggressive rhythms. The composer was present to walk onstage and receive a thunderous ovation.

Mahler's Symphony No. 5 in C sharp Minor is one of the best examples of the composer's genius at its prime. Its central themes literally dance with vibrant energy. His melodies and use of the horns, woodwinds and percussion echo the sounds of nature and the universe. It contains not only references to the composers own earlier works, but to his musical inpiration, Wagner. There are no angelic voices singing in this work, only the music. As the composer noted in his own words "The human voice would be absolutely out of place here. There is no need for words; everything is expressed in purely musical terms."

Conductor Bychkov found just the right tempos to advance this thunderous work. The Adagietto was almost ethereal as it swept breathlessly into the finale. This was a performance that shone with the bright light of genius, with restraint built in to preserve the element of suspense and sustained energy. The Scherzo brought forth the full color and texture of the orchestra which sparkled like a multi-faceted diamond. This was symphonic music at its finest, with the ability to stir the deepest of emotions and to move one almost to tears with the sweep of a hand or baton. It was truly a jubilant and magical performance.
Posted by Dwight the Connoisseur at 3:29 PM