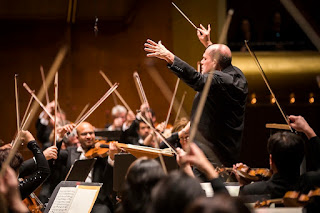 NEW YORK--There's a new musical sheriff in town and he's Jaap Van Zweden (pronounced Yap-van-ZWAY-den) who has been named Music Director Designate of the New York Philharmonic, effective in the 2017-2018 season. He officially takes over as the new Music Director, replacing Alan Gilbert , in the 2018-2019 season.

Audiences got a sneak peak preview of maestro Van Zweden in advance of his new position at an Open Rehearsal on the morning of that evening's  subscription series concert, Thursday, Nov 17.  van Zweden conducted Wagner's Prelude to Act 1 of Lohengrin, and presented the New York premiere, and world premiere of the revision, of Unearth and Release, a viola concerto by American composer Julia Adolphe, which featured the orchestra's principal violist, Cynthia Phelps, in a stellar performance. 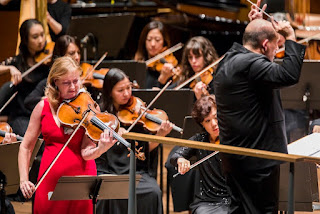 van Zweden is a meticulous conductor, who approaches the score with astonishing precision. He holds closely to the melodic line in his interpretations and keeps a tight rein on tempos. His verbal direction to the orchestra was quite clear and audible and his no-nonsense approach brought about immediate results. His inclusion of the new Adolphe work is a positive sign that he will continue Alan Gilbert's efforts to introduce more contemporary works with living composers into the orchestra's repertoire.

The Tchaikovsky Symphony No. 4 was the concluding work of the program. The orchestra played it with exceptional vigor and enthusiasm, as if delighting in and rejuvenated by the presence of a new leader with a refreshing view of what orchestral music is all about. For further information on the NY Philharmonic and its Music Director Designate, visit www.nyphil.org.


Posted by Dwight the Connoisseur at 2:30 PM