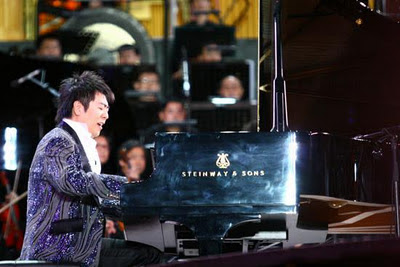 New York—Pianist Lang Lang is the hottest Classical music star on the planet. Known for explosive pyrotechnics on the keyboard, combined with youthful panache accented by his spiked hair and ultra-hip designer wardrobe, he attracts attention and critical praise wherever he appears. He is certainly the most popular Classical music personality of our time. Mozart and Beethoven were similarly popular in their times, but they weren’t viewed by four billion people in a single performance. That’s how many people watched him perform at the Opening Ceremony of the 2008 Beijing Olympics.

Here in New York, a capacity audience greeted him at Carnegie Hall for a program that included Beethoven’s Piano Concerto No. 2 in B-flat Major with The Philadelphia Orchestra and it’s Chief Conductor Charles Dutoit.

A subdued Lang Lang strode onto the Perelman stage in the Isaac Stern auditorium and adjusted his seat at the Steinway. Instead of wearing his jazzier Armani duds, he was serene in traditional white tie and tails as he began to sway to the dance-like early bars of the Allegro con brio in the First Movement of the Beethoven under Dutoit’s stately baton.

The soloist’s sprightly introduction of the opening piano theme set the tone for the imaginative, probing display that would ensue. This is Beethoven’s shortest piano concerto, but in brevity, there is truth. The work displays the mind of a mature composer and Lang Lang’s approach gave it the justice it deserved.

This was a measured, introspective performance by Lang Lang, devoid of any of the physical histrionics he has been known for. At 29, he has certainly matured into a performer who has transcended technical prowess to exhibit real artistry. The second movement, Adagio, certainly exemplified that fact.

Both the orchestra and soloist moved into high emotional gear for the final Rondo: Molto allegro, ending on a spirited note that brought a prolonged ovation, which Lang Lang obliged after several false exits with a probing reading of Franz Liszt’s familiar “La campanella” Etude (Grand Paganini Etude No. 3).

Lang Lang honored Liszt’s 200th Birthday in a two-night concert celebration, October 22 &24 with Charles Dutoit and The Philadelphia Orchestra that was transmitted live in movie theatres around the world by Fathom Events. Past experience has shown that Encore Presentations are often scheduled for such popular events, so check your local listings or www.fathomevents.com, for future dates.

History tells us that Shostakovich suffered endless humiliation and persecution at the hands of Russia’s cruel despot, Joseph Stalin. With news of his passing just months before the completion this piece, this may have been the composer’s version of an end-zone victory dance. Maestro Dutoit and company aptly captured his spirit in a stirring finale full of musical fireworks.

Posted by Dwight the Connoisseur at 7:24 AM