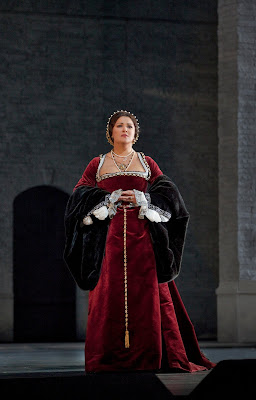 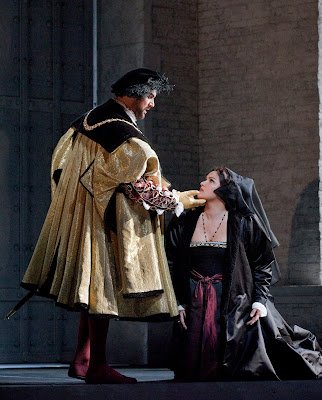 NEW YORK—Russian soprano Anna Netrebko was luminous in the Met Premiere performance of Gaetano Donizetti’s Anna Bolena. The opera recounts the final tragic days of Henry VIII’s second wife, Anne Boleyn, who is sent before the headsman’s axe, in his murderous palace intrigue to wed a new queen. Even those who are closest to her, betray her. As the doomed innocent, Ms. Netrebko gives a towering performance in the title role, which many are comparing to the legendary 1957 performance by Maria Callas at La Scala.

The opera, which opened the Met’s 128th season, was transmitted live from the stage of the Metropolitan Opera House to large screens on Lincoln Center’s Josie Robertson Plaza and to Times Square in New York. The opera will also be transmitted Live in HD to more than 1,500 movie theatres in 46 countries around the world Saturday, October 15 at 12:55pm Eastern Time/11:55am Central.

Directed by David McVicar, the production featured stark sets designed by Robert Jones and opulent costumes by Jenny Tiramani that evoked the period and also heightened and underscored the dramatic import of the opera with a bold use of color. Tiramani is the former head costume designer at Shakespeare’s Globe Theatre in London and based costume ideas on portraits by Henry VIII’s court painter.

Lighting by Paule Constable was an integral part of the success of this searing production. It is no surprise that Constable also won a Tony for her work on the Tony Award-winning play War Horse, in performances next door to the Met at the Beaumont Theatre.

Conductor Marco Armiliato set the tone for this somber portrait of tragedy from the opening strains of the overture. Donizetti’s fluid score sparkled with sharp tempos and bright melodic figures from the first violins to elongated, thundering lines from the bass and percussion. Woodwinds and brass were especially strong in setting out the opera’s main themes.

Ms. Netrebko is flanked by a stellar cast, which matches her superlative vocalese note for note and plays off of her exceptional acting skills. Especially strong are the performances of Stephen Costello as Anna’s first love, Lord Percy and mezzo-soprano Tamara Mumford as her devoted page, the musician Mark Smeaton. Her singing in the first scene is magical. The scene between Anna and her turncoat lady-in-waiting Giovanna, Jane Seymour, sung by fellow Russian, mezzo-soprano Ekaterina Gubanova is one of the richest moments of the evening.

Russian bass Ildar Abdrazakov is deliciously despicable as the vainglorious Enrico, Henry VIII, King of England. His is a towering presence, with a commanding voices that booms to the rafters.

The Second Act is all virtuoso Netrebko in full flight. She pulls out all the stops in a tour de force performance in which she excels as both singer and actress. Rarely has such power been unleashed on any stage. I had to see her twice to ensure that I was witnessing what I perceived to be one of the finest performances ever on the Met stage.

Anna Bolena is one of the defining roles of dramatic and Bel Canto opera. For Anna Netrebko it is the vehicle that will make her one of the enduring stars of the modern opera universe.

Posted by Dwight the Connoisseur at 6:53 PM