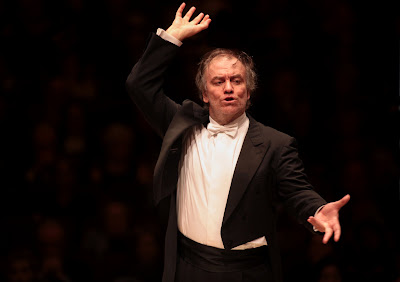 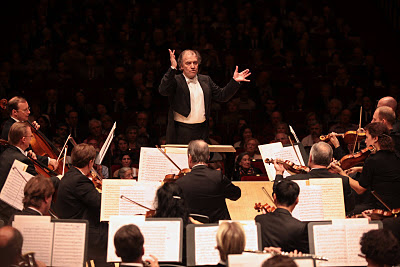 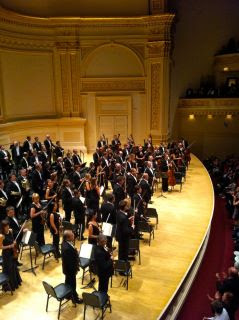 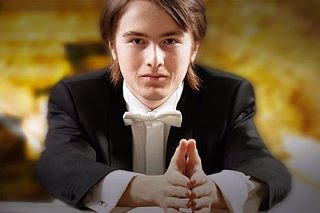 Reviewed by Dwight Casimere October 11, 2011
Photos: Valery Gergiev at the podium (c) 2011 Steve J. Sherman
Daniil Trifonov, Piano
NEW YORK--Fluent Russian was the primary language heard as I muscled my way past the throng on the streets, anxiously seeking last minute tickets to the Marrinsky Orchestra if St,Petersburg's final concert of the season at Carnegie Hall.
In addition to celebrating Carnegie Hall's 120th Anniversary, the concert also marked the premiere of Carnegie Hall Live, WQXR Public Radio, New York City, Carnegie Hall and American Public Media's vibrant new radio broadcast and digital media series that will present twelve live performances from the stages of Carnegie Hall during the 2011-2012 concert season. Live national radio broadcasts will air on public radio stations across the country. Digital partner NPR Music will also host live chats during every live broadcast.
Mariinsky Orchestra Music Director and Conductor Valery Gergiev presented a stellar program of Russian composers, Sergei Prokofiev's sprightly Three Selections from Romeo and Juliet and ending with Dmitri Shostakovich's bombastic Symphony No. 1 in F Major. The centerpiece was a deliciously inspired performance by Grand Prize and Gold Medal Piano winner in the XIV International Tchaikovsky Competition, Daniil Trifonov in Tchaikovsky's imperial Piano Concerto No. 1 in B-flat Minor.
The Concerto No. 1 is the bane of every young pianist with aspirations to conquer the concert stage. Its arching melodies and thunderous crescendoes can either lift a career to the heights or send it crashing to earth, like Icarus flying to close to the sun. Trifonov flew with wings of an eagle, doing aerial acrobatics in the process. It was a performance than merged poetry with dazzling technical skill. It is amazing that a performer so young can capture the emotional depths of a piece of music and navigate its complexities with such ease to reveal its emotional heart behind the musical maze.
Audiences might have been similarly dazzled in 1891, when the composer, Tchaikovsky, was the solo pianist at the opening night concert for Carnegie Hall.
At this performance, the Mariinsky Orchestra, under Gergiev's inspired direction, chose a tack far different than any I have heard before. Instead of opening with an explosion, he chose to focus on the score's dance like rhythm, proceeding to allow the melody to unfold in a relaxed pace. He allowed the melodic line to emerge in a seductive manner, giving ample running room to his thoroughbred performer. It was exquisite to behold!
Trifonov was especially riveting in the second movement, the Andantino semplice. His later handling of the thunderous octave runs in the Prestissimo showed his real merit. Here, every measure was played in direct connectivity. There was not a break in continuity anywhere. His crescendoes were less for dramatic affect than to create a musical statement that was precise and cohesive. Rather than dazzling with pyrotechnics, he allowed the composer's music to shine forth with great emotional clarity. He obliged the audience with a surprise pair of encores; the familiar Chopin Grande Valse Brillante in E-flay Major and Listz's La Campanella, Grandes etudes de Paganini. The former showed his ability to reimagine a piece that is so familiar to most music lovers and find its inner truth and make it sound new and alive. The second piece showed his sheer genius and power at the keyboard. He is a breath of fresh air on the classical music stage with a fluid delivery that is as natural as breathing. His ability to generate an almost magical aura that engaged both the ear and the spirit is inspiring.
The final piece, Dmitri Shostakovich's Symphony No. 1 showed the Mariinsky Orchestra at its best and confirmed its place in the apex of the world's classical music constellation. The burnished strings delivered the composers brooding melodies with a dark, moody air that contrasted sharply with the militaristic staccato of the crisp brass. The woodwinds gave a lilting heavenly air to Shostakovich's sometimes troubling score. The Mariinsky orchestra possesses one of the finest percussion and brass sections to be heard anywhere and they were utilized by Maestro Gergiev to tremendous advantage in the thundering conclusion.
Posted by Dwight the Connoisseur at 12:08 PM