New York Film Festival: The Kid with a Bike 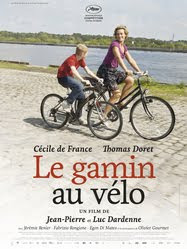 Chicago—Winner of the Grand Jury Prize at this year's Cannes Film Festival, The Kid with a Bike is a poignant dramatic film written and directed by Belgian brothers Jean-
Pierre and Luc Dardenne. A joint production of companies in Belgium, France and Italy, it can truly be called, on a small scale, at least, an international production. In many ways, its message is also international and universal.

The Kid with a Bike tells the story of Cyril, an 11-year-old boy who is left in a home for homeless children. His father tells him that the move will be temporary, but, the time approaches for Cyril to go home, it becomes abundantly clear to him that he is abandoned.

The film begins as Cyril makes his violent escape from the children’s home, biting and clawing his way past the counselors and paramedical staff and then finally using deception and guile to make his way to freedom. Once out, he sets upon his father’s trail.

Cyril’s personality and behavior are a dichotomy. On the surface, Cyril is troubled youth with the flashpoint of a dripping tank of petrol (a petrol station plays a pivotal role in the plot late in the film). When he goes back to the dingy housing project apartment where he and his father lived, he finds it abandoned, his father having disappeared more than a month previous. Not only is the apartment emptied of all possessions and his father flown the coop, his precious bicycle is also missing. It is at that point that the elements of the movie begin to kick in. As he is exits from the apartment feeling dejected, he is met by Samantha, the local hairdresser who tells him that she has purchased his bike from the father of a boy who had bought it from his father.

Cyril doesn’t believe her for a minute, asserting that the bike was stolen and sets out to exact revenge against the young thief and recover his bike.

He locates the suspected henchman and his young cronies on the local playground. Here, we get to meet the other side of Cyril’s split personality. He becomes a raging banshee, a vicious hyena who corners his prey around the watering hole in the Serengeti and attacks with fury. Needless to say, Cyril gets his bike back and rides off in a wave of retribution.

The curious thing about Cyril is that once he’s back on the scent of his father’s trail, he becomes centered and focused. He doggedly pursues him with intensity and deliberateness to the fury equal he displayed against the supposed bike thieves. Along his tracking mission of his father, he is directed to a local gas station where he sees a sign posted that, indeed, confirms that his father advertised and sold, not only all of his worldly possessions, but his precious bike as well. It is a crushing moment.

Miraculously, and with the help and support of his newfound Guardian Angel Samantha, he finds his estranged father, toiling away with his new wife or girlfriend as a cook in her small restaurant in a distant town. Not surprisingly, the father rejects him, this time to his face. Cyril is destroyed and attempts to disfigure himself on the solemn ride home.

This was a difficult film to watch because it raises some very tough questions about displaced and abandoned youth, particularly those who have been rejected by their fathers. It took a European film to bring home with thundering clarity the truth behind the issue of all these fatherless boys running around the ghettos of America, seeking a sense of belonging and mentoring in the street gangs and creating father figures and heroes out of the gang leaders and drug dealers that terrorize our streets. Transport the story of Cyril four thousand miles to the streets of Chicago’s south side and substitute the two-bit teenaged thug who recruits Cyril into his gang for Rev. John Fry and Jeff Fort and his Blackstone and later P Stone Nation and then take it back about eighty or so years to the streets of Berlin and Adolf Hitler and his Youth Brigades and their older siblings, the SS. But, I digress.

A thug named West (Egon Di Mateo-an enigmatic young actor with a smoldering undercurrent) trains him like a ninja in the art of thievery. Instead of creating sensei, he is developing monsters that use violence to rob and steal to pay tribute to their newfound evil Zen master.

The movie particularly hit home with me personally. I was about the same impressionable age, as Cyril when my parents divorced and my father outright disowned me to my face, in much the same manner experienced by young Cyril. Just like Cyril, my father cast me aside at a time when I needed him the most. Fortunately for me, I had loving grandparents to guide me and a love of sports and music that absorbed my attention and served as vehicles to absorb my hurt and anger.

Cyril’s journey is not without its obvious pitfalls. Somehow, his determination, and his precious bike, become vehicles to his salvation.

The Dardenne brothers have presented a beautifully crafted film that deserves recognition. You should go see it.

The Kid with a Bike is also a Special Presentation at the 47th Chicago International Film Festival.

Posted by Dwight the Connoisseur at 10:58 AM