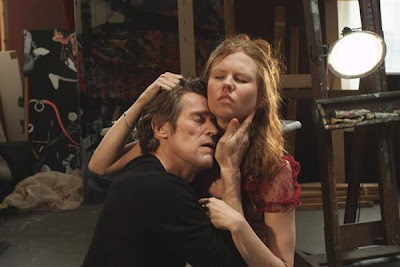 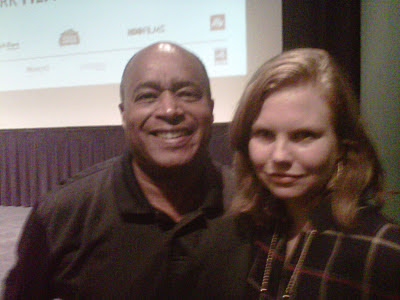 1. Opening image of Kirstin Dunst as Justine in Melancholia

2. Willem Dafoe as Cisco and Shanyn Leigh as Skye in 4:44 Last Day On Earth

New York—Each successive decade, directors seem to pounce on a universal theme and create a new genre of film around it. In the late ‘50s and early ‘60s, alien invaders seemed to be crossing the threshold of the atmosphere at an alarming rate. Post Anti-War and Civil Rights era, a lingering skepticism fueled a string of political satires and conspiracy movies. The excess of the ‘80s brought another round of self-absorbed cynicism, evidence the 1987 film Wall Street. Now, in post 9/11 America, a new threat has arrived on the horizon, the end of the world.

Within days of each other, two films were screened for members of the press and industry that viewed the apocalypse from the vantage point of a controversial Danish director and a brusk, Bronx-born independent American filmmaker. The film Melancholia directed by Lars von Trier (Dancer in the Dark-Cannes Palme d’Or winner 2000, Dogville-2003, starring Nicole Kidman), in which the narrative revolves around the aftermath of the wedding of one of two sisters, played by American actress Kirsten Dunst (Interview with the Vampire-1994, Little Women-also 1994, Spider-Man 2002) and British actress Charlotte Gainsbourg (Jane Eyre-1996, I’m Not There-2007). Gainsbourg is a von Trier veteran, having worked on several directed by him.

Melancholia is von Trier’s finest work. Unfortunately, he undermined it with his controversial comments about Nazism during a news conference at the Cannes Film Festival in May. In spite of his skewed comments, Dunst received the festival’s Best Actress Award for her performance. Von Trier has been banned from the festival.

Melancholia is almost operatic in its scope. In fact, it begins with the musical backdrop of the Prelude from Wagner’s Tristan und Isolde. The music is epic in scope, no less so than the theme of the movie, the end of Earth. Visually, the overlay is a series of dream-like tableaux that hover somewhere between Salvador Dali and Francisco Goya; a bride drags her dress through the grass until it is in taters, a horse sinks into the mud, a child languidly carves a long tree branch as a woman looks on pensively from a distance, a view of the midnight sky shows what appears to be two moons. Already, you know where this is going, but, like watching a train crash, you can’t turn away.

Director von Trier has said the idea for Melancholia grew out of therapy sessions he was undergoing for treatment of depression. The idea for the cataclysmic collision was inspired by websites devoted to the event’s potential. Setting the event in during the course of a family event, he said, made it possible to examine the human psychological response during a disaster. He achieved that goal and more. Melancholia is a riveting film that draws you in and engages you, even though you know the ultimate outcome.

There is fine acting by a superlative cast throughout. Dunst, who is probably best known by the masses as the girl who kissed Spidy as he was upside down, shows real dramatic chops as the troubled bride, Justine. There is one scene where she unleashes her pent up fury on her vainglorious boss, Jack, played by Stellan Skarsgard (a veteran of four von Trier films and best known for his role as the guilt-ridden policeman in the original Insomnia).

The film opens in the moments just after the wedding and leading up to the wedding party. We already know trouble is afoot in the marriage, when she decides that the first person she wants to greet after the ceremony is not her family and guests, but her horse, Abraham. She decides to go for a ride.

The metaphor for her love of her horse is continued in a later scene, when she drags her newly appointed intern, Tim (Brady Corbet-Thirteen-2003, Mysterious Skin-2004), out to the eighteenth hole of the family’s private golf course, and proceeds to mount him sexually as he if were here prized steed.

Donald Southerland is absolutely commanding as the older brother. He has finally achieved the age and experience to fill the large acting shoes of his esteemed father.

What a delight to see John Hurt (The Elephant Man-1980, Lord of the Rings Trilogy) in the role of Justine’s impish father, Dexter. Charlotte Rampling spits venomous bars laced with penetrating truth as his estranged wife, Gaby. “Why don’t you just run from here? Just get away!” she advises Justine as her daughter agonizes over her recent marriage.

4:44 Last Day on Earth by American Director Abel Ferrara is a rather claustrophobic look at the end of the world through the eyes of a New York couple, Cisco (Willem Dafoe, Platoon-1986, Shadow of the Vampire-2000) and Skye (Shanyn Leigh, Napoli, Napoli, Napoli-2009, Public Enemies-also 2009).

In contrast to the sweeping emotional and visual panorama of Melancholia, ‘Last Day’ is a claustrophobic closet drama that pales by comparison, but makes its point nonetheless. It is a microscopic examination of a sliver of life as two little people face the awesome challenges of the universe.

The film takes us into the Lower East Side apartment of Skye and Cisco as they frantically try to cope with the reality of their final hour on Earth. Cisco is an aging New York City actor who lives with his much younger, twenty-something girlfriend. It at times descends into a sophomoric discussion over ethics and the questions of how we choose to die and choose to live. The emotional climax comes when Cisco lets his old life creep into their New Age relationship. Should they spend their waning moments in mindless sex or should they heal the psychic wounds they inflict upon one another. Ironically, the most electric moment in the film comes when Skye becomes incensed over Cisco’s emotional allegiance to his past relationship and his selfish desire to give in to his former lust for drugs, rather than spend the time embracing her. At times, Dafoe seems to walk through his characterization, but Leigh catches fire with a torrent of rage that lights of the scream as surely as any solar collision. I asked Leigh about her on-screen outburst in the aftermath of a news conference following the NYFF screening.

“If you just listen to what he was just saying (Dafoe/Cisco), that he still loved his ex-wife, that gave me a lot of emotional fuel; just living in that moment. It was really difficult for my character, listening to him talking to his ex- wife. That was probably the hardest scene for me to shoot in the entire movie,” she said, her face visibly showing that she was reliving the anguish of the experience. “It really took a lot of emotion. Here she is, preparing to die, and she’s also feeling that she’s lost the emotional connection to her boyfriend. I mean, throughout the entire film, she’d been studying how to die, then she’s hit in the face with this, that she’s about to lose her boyfriend.

Melancholia is a Special Presentation in the 47th Chicago International Film Festival.

Posted by Dwight the Connoisseur at 8:36 AM