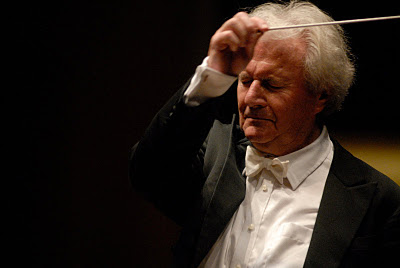 New York---Sir Colin Davis has been associated with the London Symphony Orchestra for more than a half century. All of that rich history of music collaboration came together in a magnificent way as he led the London Symphony Orchestra in an all-Sibelius program at Avery Fisher Hall as the opening night of Lincoln Center’s White Light Festival. With the brilliant young violinist Nikolaj Znaider performing Sibelius’ enigmatic Violin Concerto in D minor at the outset of the evening, this was one of the most artistically satisfying programs to emanate from Avery Fisher Hall this season.

At 84 years old, Sir Colin Davis is in firm command of the orchestra and its repertoire. His only concession to his advanced years is his conducting while seated rather than standing. His precise control and razor-sharp delineation of tempos and dynamics remains as crystalline as ever. The brightness of the first violins and the clear rubato of the cellos with their amber sound and the burnished resonance of the bass are distinctive to the ears of music lovers and contribute to the signature sound of the London Symphony Orchestra.

Jean Sibelius is one of the most challenging and stylistic progressive composers of the early twentieth century. His works often combine classicism with an overtly modern, individualistic approach. His propensity toward celebrating the folk rhythms and melodies of his native Finland has made him a cultural icon in that country. His symphonic poem Finlandia is regarded as among his finest works and its central theme, the Finlandia Hymn, is regarded as one of Finland’s most important national songs. More recently, it found its way into the film score for the 1990 Bruce Willis film, Die Hard 2.

Action movies aside, this program of Symphonic Masters saw one of the world’s greatest orchestras and its venerated 84-year-old leader at the top of their form in a concert that bristled with excitement.

Znaider charged into the difficult double and triple stops of the Violin Concerto with a ferocity that literally leapt from the stage. Sir Davis kept a firm hold on Sibelius’ wildly varying tempos and shifting themes with the firm grip of a Formula One racing driver. There were moments in the final Allegro, ma non tanto that were literally breathtaking.

In contrast to his previous fiery solo performance, Znaider obliged the enthusiastic audience with a heartfelt encore, Bach’s Sarabande, from Partita No. 2 in C minor, which he dedicated in a spoken salutation, as tribute to Sir Colin Davis and his more than 50 years of service to the orchestra. It was a touching moment that added a note of poignancy.

Sir Davis walked to the podium for the second half with a distinct air of purpose. Touching the step to the podium with his baton to ensure his footing, he proceeded to conduct Sibelius’s Symphony No. 2 in D major, infusing it with a youthful vitality that explored its universal themes of hope in the face of adversity and its obviously triumphant, yet romantic underlying theme. The strings played the final theme with a sense of majesty. The brass and percussion displayed a unity of sound and purpose that was spine chilling. It was an inspired performance.

It was not without of touch of irony that I noticed that the world awakened to the news of the assassination of Muammar Gaddafi in Libya. In the time of Jean Sibelius, Finland was under the hob-nailed boot of Mother Russia. In many ways, his music represented a veiled protest to their oppression. It seemed fitting that the strains of Sibelius’s heroic music and its myriad political metaphors would still be ringing in memory.

Posted by Dwight the Connoisseur at 2:12 PM