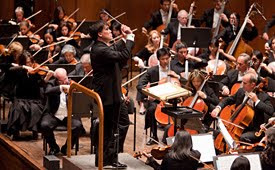 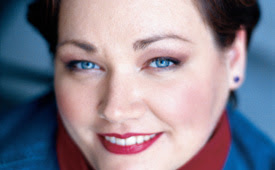 1. Music Director Alan Gilbert in full flight at the helm of the New York Philharmonic

NEW YORK—It is rare that a living composer graces the stage of a classical music concert, but there, amidst the ovations following a performance of John Corigliano’s One Sweet Morning by Music Director Alan Gilbert and the New York Philharmonic at Avery Fisher Hall, stood the composer, flanked by the maestro and the superlative mezzo-soprano Stephanie Blythe.

It was Alan Gilbert’s finest hour and an example of the New York Philharmonic at its best. It was also a collaboration of kindred spirits. Maestro Gilbert is the son of two Philharmonic members, his mother, in fact, still plays in the orchestra. Corigliano’s father, also named John, was concertmaster for more than two decades. Add to the mix the super human talents of Stephanie Blythe and you have the recipe for a performance that is literally out of this world.

Corigliano’s One Sweet Morning was originally commissioned by the Philharmonic to commemorate 9/11. Coming just weeks after the orchestra’s Concert for New York, performing Mahler’s Symphony No. 2, Resurrection, which was broadcast live on the PBS network, marking the tenth anniversary of 9/11, it served as a sort of bookend to the tragedy. Unlike the conclusion of the Mahler, the mood on this night was celebratory, with Corigliano lifting the hands and arms of Ms. Blythe and Mr. Gilbert like champion marathon runners at the finish line.

Essentially a musical setting for four poems, A Song on the End of the World, by the Polish poet Czeslaw written during the weary waning days of World War II, Patroclus from Homer’s The Iliad, which plunges the listeners into the vortex of the Trojan’s war against Troy, War South of the Great Wall, another reflection on war by the 8th Century Chinese poet Li Po and the titled One Sweet Morning by E.Y. “Yip” Harburg. Ms. Blythe’s rich, mellow mezzo voice caressed each word and underscored it with dramatic import. At times, her resonance melded with that of the orchestra, creating a sensation that made her voice seem like another of the finely tuned instruments.

Samuel Barber’s Essay No. 1 for Orchestra began the program with a candid look at the young composer at work. The orchestra had played his Overture to The School for Scandal as part of its Opening Night concert, featuring Deborah Voigt and this too served as a type of musical chronicle of this great composer. This rhapsodic work was a true showcase for the orchestra with the burnished warmth of the lower strings in the opening movement setting the tone for a dazzling performance. There were some tricky technical hurdles to overcome in the course of this fast paced orchestral recitative, but Maestro Gilbert was able to infuse a soulful resonance into both its opening theme in the Andante sostenuto and concluding Largamente, while lending balance to the intricate Allegro molto in between. There were parts that sounded identical to Barber’s most famous piece, the Adagio for Strings. That, as Martha Stewart would say, is surely a good thing!

As exciting as the first two offerings on the program were, the orchestra and its conductor truly shone in the Symphony No. 7 in D minor by Antonin Dvorak. Maestro Gilbert and the orchestra executed an eloquent reading of this finely crafted work. Gilbert’s conducting was inspired, with careful attention to intricate detail and phrasing. The most elegant gesture came when he urged the orchestra to full crescendo in the final movement, and then motioned to the horns to deliver an intricate grace note that perfectly revealed the ‘inner voices’ of the composition. It was an exquisite moment and the perfect ending to a magnificent, if not varied, evening of great music.

Posted by Dwight the Connoisseur at 9:58 PM