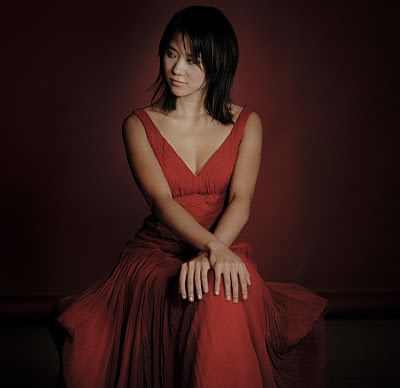 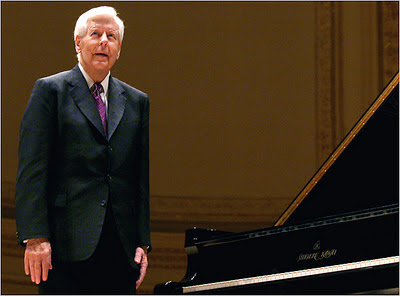 Earl Wild in a 2005 Carnegie Hall recital/Photo by Steve J. Sherman for the Associated Press

New York—The 24 year old Chinese-born piano sensation Yuja Wang made her New York Recital Debut at Carnegie Hall. With echoes of the raging controversy she caused last summer at the Hollywood Bowl by wearing a thigh-hugging bright orange micro-mini dress while playing Rachmaninoff with the L.A. Philharmonic, it was a much more demure version of the Deutsche Grammophon recording sensation that greeted a capacity audience in a program of Scriabin, Prokofiev and Franz Liszt at Carnegie Hall.

However, she still did not disappoint in the sartorial department. A daring slit down the side of her long, black velvet evening gown revealed plenty upon her exit at intermission. Her fiery, passionate style of playing on the Steinway, however, far outshone her physical beauty.

Scriabin was always the composer of choice when music instructors at the Chicago conservatory assigned what we students called “knuckle busters” to improve our skills. Wang chose a series of his Preludes (B Major, B Minor, G-sharp Minor), Etude in G-sharp and Poeme in F-sharp as a warm-up. She breezed through all of them with a lightness of touch. Her long, delicate fingers seemed to caress the keys. She eschewed extensive use of the pedals, allowing the pressure of her fingers to create sonic length and depth.

Sergei Prokofiev’s Sonata No. 6 in A Major is a groundbreaking work that literally throbs with the passion of the modern age. It is anything but a typically staid “classical” piece of music. Its pulsating rhythms and loud, almost boisterous themes were probably the model for Leonard Bernstein’s fight of the sharks and jets in his award winning musical West Side Story.

Wang explored this monumental work and all of its driving, primitive themes with a force that belied her diminutive stature. Rapid-fire 32nd notes were like shots from an AK-47 as she articulated the difficult passages. Her acuity heightened the sense of drama in the final movement, Vivace, which deservedly brought the audience to their feet in thunderous ovation.

Franz Liszt’s Sonata in B Minor brought another gown change, this one slit on the opposing side to reveal her shapely legs. She immediately threw herself rapturously into the music.

As dazzling as the Prokofiev was, her approach to the Liszt was truly astounding. The last time I heard this piece played, it was at the hands of the great Earl Wild in one of his last recitals. Mr. Wild died last year at the age of 94. He had the distinction of being one of the few living pianists with a direct musical lineage to Franz Liszt. In his formative years, he began studies with Selmar Jansen, a pianist who studied with the composer-pianists Eugen d’Albert and Xaver Scharwenka, both of whom were students of Liszt. While Wang cannot claim such pedigree, her handling of the opening passages proved her innate understanding of Liszt’s enigmatic and innovative genius. Her playing revealed all of the work’s underlying drama, yet her restraint and command of Liszt’s constantly shifting dynamics brought out its tender moments with startling emotional clarity. There was a quiet tension throughout that revealed the fiery passion that burned beneath. At one point, she raised her hands above the piano in crescendo. She swooned with ecstasy as the notes reverberated from the Steinway and echoed into the upper reaches of Stern auditorium only to vanish like so many fireflies in the night sky. It was an exquisite moment.

As encores, she played Franz Schubert’s Gretchen am Spinnrade, D.118 (arr. Liszt) Paul Dukas' The Sorcerer's Apprentice (arr. Yuja Wang) Christoph Willibald Gluck’s Melodie from Orfeo ed Euridice and Johann Strauss Jr. "Tritsch-Tratsch" Polka (arr. Cziffra). Each explored the many facets of Wang’s skill at interpretation as well as her full command of her instrument. At times, particularly during the Gluck Melodie, she made the Steinway literally sing.

Posted by Dwight the Connoisseur at 9:59 AM