Cassandra Wilson:an eclectic work of art in progress in Jazz at Lincoln Center 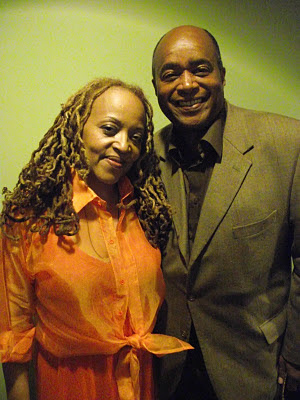 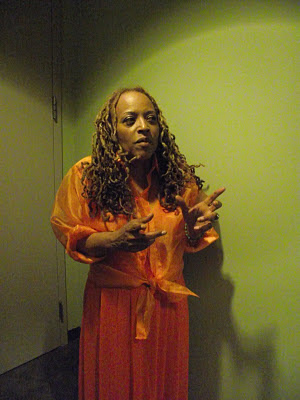 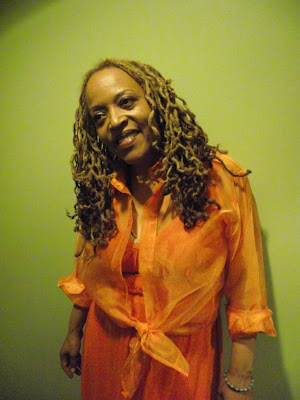 1. Cassandra Wilson with Dwight Casimere at the Rose Theater, Jazz at Lincoln Center

NEW YORK—An eclectic evening of jazz, roots music, gospel and hints of the mellower side of R & B delighted a packed Rose Theater as Cassandra Wilson, the GRAMMY ®-winning vocalist, songwriter and producer kicked off Jazz at Lincoln Center’s Visionary Voices series.

With an exceptional septet of equally innovative musicians, pianist Jon Cowherd, bassist Reginald Veal, drummer Herlin Riley, percussionist Lekan Babalola, harmonica virtuoso Gregoire Maret, and guitarist Marvin Sewell, Ms. Wilson led the audience on an exotic journey into the deepest heart and soul of American music. Her selections are not presented so much as individual songs, but as portraits upon which she layers a collage of vocal colors and textures, using the many facets of her magnificent voice as an instrument. Her use of phrasing elevates the lyrics to the level of poetry. To say that this was an inspired performance is an understatement.

The walls of the Time Warner Center on Columbus Circle, where Jazz at Lincoln Center is located, must have reverberated with the mellifluous sounds that she and her ensemble created. The Mississippi native freely navigates the rivers of the soul as she helms renditions of her own compositions and those of Stevie Wonder, Charley Patton and Miles Davis.

With her rich contralto voice, which is equal to any heard in Lincoln Center’s other venues, Wilson launched into an introspective journey that spanned the length and breadth of her impressive recording career; including selections from her landmark Blue Note albums released over the past 17 years.

Her soulful rendition of Patton’s Pony Blues was one of the timeless moments that brought her considerable talents into focus. The interplay between she and Gregoire Maret on his chromatic harmonica was among the most thrilling moments of the evening. The two raised the level of live jazz performance to that of high art.

Bassist Reginald Veal, with his resounding tones, proved equally proficient at providing a firm underpinning to the music’s progress and breaking loose with freely associated melodic lines. He showcased the flexibility of his instrument as well as his extraordinary talent.

Cassandra Wilson’s voice is like looking at a multi-faceted diamond. Each of the songs she presents reveals a different angle and color of her kaleidoscopic voice. She can change the meaning of a word with the slightest inflection of her voice and influence the harmonic tone of a melody with her phrasing and intonation. Bob Dylan’s “Lay Lady Lay” also displayed her unique capability at becoming rhythmically at one with her band.

The original ballad “Until” was another of those moments when time and space seemed suspended in perfect equipoise. Her obbligato was mimicked by Gregoire Maret’s harmonic to perfection. She made no bones about who was in charge of things when she ordered the band to “Saddle Up My Pony.”

Her superior mike technique delivered an anguished moan on “Redbone.” Her later nod to jazz genius Miles Davis and his “Run The Voodoo Down” from his landmark album Bitches Brew provided a vehicle to meld the rhythmic power of her voice with that of her superb percussionists.

No Cassandra Wilson concert is complete without a rendition of St. James Infirmary and Ms. Wilson did not disappoint, delivering a version that gave extra punch to the lyrics (maybe she had headed down to the Wall Street protests before the show!) and then gave plenty of running room for Marvin Sewell’s blues guitar.

This was not a concert in the typical sense, but a retrospective of a brilliant career, curated by the artist herself, who is still a work in progress.

I have long been a fan of Cassandra Wilson and have spent many evenings intently listening to her CDs. My last experience of seeing her live was at the Chicago Jazz Festival several years ago. Unfortunately, a talkative companion ruined my evening. Fortunately, the superb acoustics and the unobstructed sightlines of the Rose Theater ensured an all-encompassing interface with this engaging artist, that more than made up for that lost experience.

Posted by Dwight the Connoisseur at 4:06 AM